On 13 July 2016, RW(UK) launched its landmark Report, Preventing Education: Human Rights and UK Counter-Terrorism Policy in Schools (link below) at an event at the Houses of Parliament.

The event was chaired by Baroness Kennedy of The Shaws QC, Patron of RW(UK), and was attended by a wide range of stakeholders, including representatives from Muslim community groups, children’s rights organisations, as well as community workers and parents of students who have been affected by the Prevent strategy. Discussions were led by a panel of speakers, including Yasmine Ahmed (Director of RW(UK)), Kevin Courtney (Acting General Secretary of the National Union of Teachers (NUT)), Rob Faure Walker (Teacher and Academic), and Sixth Form college student Munadiah Aftab.

RW(UK)’s Report analyses the impact of the Prevent strategy on children, and the human rights compliance of the strategy as it relates to schools in the UK. Prevent forms part of the Government’s counter-terrorism strategy and aims to prevent people becoming terrorists or supporting terrorism. Since 1 July 2015 there has been a statutory duty on certain bodies, including schools, to have ‘due regard to the need to prevent people from being drawn into terrorism’ in the exercise of their functions.

At the launch event, Yasmine Ahmed introduced the key findings of RW(UK)’s Report, highlighting the way in which the Prevent strategy – and in particular the introduction of the statutory duty – is stifling the fundamental rights and freedoms of children across the UK, including their rights to freedom of expression and belief, and their right to education. The Report demonstrates that Muslim children have been disproportionately impacted by the strategy and fear being reported for expressing their political and religious views, which is having a chilling effect on free speech among Muslim children and a detrimental impact on their right to education. The Prevent strategy is proving to be counter-productive, since the clamp down on open expression and debate in classrooms is driving children to discuss issues related to terrorism, religion and identity outside the classroom and online, where simplistic narratives are promoted and go unchallenged. It is also stigmatising and alienating the very communities that the Government needs to work with in order to combat terrorism.

Furthermore, the Report notes that there is a lack of clear guidance and training as to how the Prevent strategy should be implemented, leading to arbitrary interventions in the lives of children. This is in part due to the overly broad definition of extremism and the vaguely formulated ‘indicators’ of vulnerability to extremism, which mean that there is little predictability or uniformity in the way that decisions under Prevent are taken. Finally, the report also finds that the rationale underlying the Prevent strategy is highly questionable given that it rests on the assumption that holding non-violent extreme views is a pre-curser to committing acts of terrorist violence, a theory which has been widely discredited. The Report makes a number of recommendations, including that the Prevent strategy insofar as it applies to schools must be repealed and abandoned; that a full and independent audit of the operation of the Prevent strategy must be undertaken by an independent reviewer; that an assessment of the current legislative and policy frameworks should be undertaken to determine whether there are in fact any legal or policy gaps that need to be addressed; and that there must be genuine and wide stakeholder consultation going forward, given the impact that Prevent has already had on the relationship between members of the Muslim community and the Government.

Kevin Courtney, Rob Faure Walker and Munadiah gave compelling accounts of their own personal experiences of the Prevent strategy, and the chilling effect that it has had on political and religious discussion in classrooms. Rob Faure Walker, who teaches at a school in Tower Hamlets, emphasised the importance of ensuring that schools remain ‘free spaces’ for debate if we are to combat extremism, and expressed his concern that Prevent is having the opposite effect in terms of causing students to feel unable to express their views in class. Munadiah explained that Prevent has the effect of isolating and alienating students at a time where they are trying to construct their personal identity and place in society, leading them to look for acceptance elsewhere. Attendees voiced their concerns that the Prevent strategy in schools does not give sufficient consideration to the best interests of the child, which should be the primary consideration where any public body takes any action concerning them.

Yasmine Ahmed urged attendees to read the report and join RW(UK)’s campaign to end the application of the Prevent strategy in schools by signing the organisation’s online petition, arguing that the strategy is not fit for purpose. In light of the publication of RW(UK)’s Report and its recommendation that the Prevent strategy be abandoned in schools, SACC (Scotland Against Criminalising Communities) has called for a moratorium on all training for school staff in connection with Prevent, noting that RW(UK)’s Report confirmed their own concerns regarding the impact of Prevent on schools in Scotland.i It is crucial for the Government to take note of the concerns raised in RW(UK)’s Report and to examine the counter-productive effect of the Prevent strategy before it is rolled out more broadly, particularly given the current attempts to export the strategy to other countries in Europe and beyond.

i ‘SACC Calls for Moratorium on Counter-Terrorism Training in Scottish Schools’, 17 July 2016 –
http://www.sacc.org.uk/press/2016/sacc-calls-moratorium-counter-terrorism-training-scottish-schools 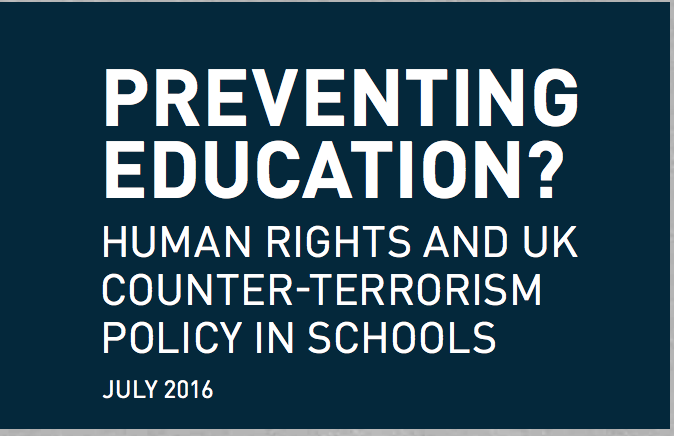